A subtle argument which often presents itself to the Christian Scientist is to the effect that it is best not to resist certain phases of evil for fear of resorting to human will-power. A careful analysis of this thought will reveal the fact that the certain phases of evil referred to are not usually classified under the heading of sickness or disease, but are more likely to be some erroneous or sinful habit, the indulgence of which is supposed to be pleasurable rather than painful.

The teaching of Holy Writ is, "Resist the devil, and he will flee from you;" and our text-book says plainly: "Rise in the strength of Spirit to resist all that is unlike good;" "Resist evil—error of every sort—and it will flee from you" (Science and Health, pp. 393, 406). None of these passages conflict with Jesus' admonition to his followers that they "resist not evil." This passage is plainly a warning against the attempt to combat evil with evil, under the Mosaic law of "an eye for an eye, and a tooth for a tooth." Jesus did not teach that certain arguments of evil were to be ignored and others denied; nor does Christian Science teach this. It is one's love of the good that enables him to resist evil intelligently; his love for evil will dispose him to ignore the task of resisting that which is supposed to afford him pleasure. To "rise in the strength of Spirit" is the problem that confronts the Christian warrior, if he would successfully cope with evil and overcome its false pretensions. 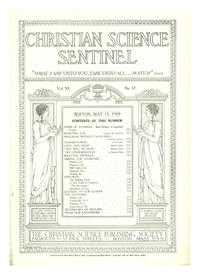