Our critic's lecture, like his book, is full of misunderstanding;...

Our critic's lecture, like his book, is full of misunderstanding; not all his own, but the errors of many ill-advised critics before him, who like himself have never demonstrated Christian Science. Christian Scientists do not believe that God makes man a sinner and then punishes him for sinning. Sin punishes itself. "Whatsoever a man soweth, that shall he also reap." The critic also falls into the common theological error about "evil." The quotation "evil is but an illusion" (Science and Health, p. 480) is only part of a sentence, and it requires the whole paragraph to get the proper meaning. The Bible tells us that "the Son of God was manifested, that he might destroy the works of the devil." These evils are summed up in three things, namely, sin, sickness, and death.

Mrs. Eddy does not teach that these evils are imagination, but that they can be destroyed because they are unreal. The word "unreal" means that which can be destroyed. It was not an "act of imbecility" for Jesus to cast out devils (illusions—unreal images presented to the senses), and he healed functional and organic disease in the same way. He said to his followers, "Heal the sick, cleanse the lepers, raise the dead, cast out devils."

Send a comment to the editors
NEXT IN THIS ISSUE
Article
On reading Mr. Paget's address address on Christian Science... 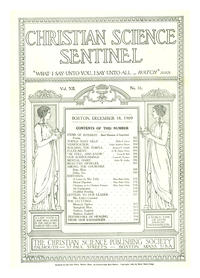