One of the clearest evidences of the wisdom of Mrs. Eddy, the Discoverer and Founder of Christian Science, is the manner in which, in her elaboration of this great theme, she has gone straight for the goal and refused to be allured to the one side or the other, or to dally with the innumerable phenomena that lay claim to the psychic or spiritual. Many easy and plausible side issues tempt the searcher after truth, and in one way or the other not infrequently succeed in deluding the unwary if sincere student. It may be assured that it is never an easy task, while investigating the region of Soul, to "try the spirits whether they are of God," and many theories are plausible enough to deceive, if possible, "the very elect." The phenomena referred to are hypnotism, spiritualism, etc. Numerous theories are laid at the door of each of these cults, and seem deeply significant, to the extent at least of showing the utter unreliability of physical sense testimony.

With a steadfastness that a very clear and uniform insight into her subject alone can account for. Mrs. Eddy has held steadily to the great central fact, has not deviated from her course because of these side issues, nor suffered the theories based upon sense evidence to modify in the slightest degree the simplicity or the singleness of purpose of her great teaching. In thus rigorously excluding the abnormal in all its phases, in refusing absolutely to compromise with that which of itself may be classed as mere mental sleight of hand or jugglery, having neither scientific basis nor conclusion, she has revealed a supremely natural concept of God as reflected in a supremely natural man. 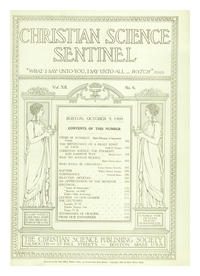