A bill has been filed in the Massachusetts House of Representatives providing that, in any city or town accepting the act, party lines shall be forbidden in municipal elections. The bill provides for a preliminary election for nominations, candidates for nominations being required to file papers ten days in advance of the preliminary election, with twenty-five signers for each ward.

Send a comment to the editors
NEXT IN THIS ISSUE
Article
SPEECH "SEASONED WITH SALT." 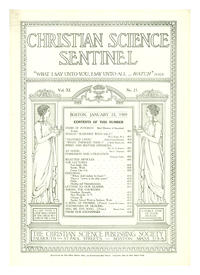