Christian Science found thousands of men and women pleading for release. In their own disturbed thoughts they were imprisoned. Throughout the weary years of suffering and woe, the best friends they seemed to have found were resignation and fortitude. They were "dying every day they lived." Yet evermore they prayed for deliverance and peace, but the appeal was as incense from the altar fires, the suppliants still clinging to the sacrifice. The gentle Beethoven holding his deaf ear to the bosom of the infinite harmonies, "even as the beloved disciple once lay upon the Saviour's breast," gave intimation of the beautiful creations of music that throbbed about him in the still atmosphere. The threnody that wove itself into the earth-life of Edgar Allan Poe, hinted the peaceful haven of poetry beyond his stormy sea, and so the sad longing and the tearful prayer of humanity for rest and health and happiness are prophecies that somewhere this side the grave, rest and health and happiness may be found. Whoever shows us the way is a friend. Whoever guides us into that way is a benefactor. Whoever teaches us how to guide others wisely, imparting restraint as well as freedom, is a helper of mankind.

The Discoverer and Founder of Christian Science is setting humanity free, and she is doing this in part by teaching restraint. The students of her teachings have learned that freedom from the bondage of the past is a serious responsibility. It implies obedience, duty, deed. Restraint is obligation. It is the guest at the feast, grateful for the invitation. Unrestrained freedom is disobedient, arrogant, rude, troublesome, and finds its way rapidly into conditions from which it must again be freed. Freedom without restraint expresses an unbalanced unity. Freedom without restraint signs its name often to pledges and resolutions; it appropriates to-day and gives to-morrow to others. Freedom without restraint is intemperate zeal, claiming more than it can prove. It attacks the servant of the high priest and is rebuked with the command, "Put up thy sword." Freedom without restraint "journeys into a far country" and "wastes its substance in riotous living." It feeds on the "husks which the swine did eat" and is glad at last to return as one of the hired servants. Freedom without restraint was Waterloo urging the old guard into danger and death, learning a little later at St. Helena what should have been previously learned at Malmaison. It is the soldier out of line, advancing without orders. 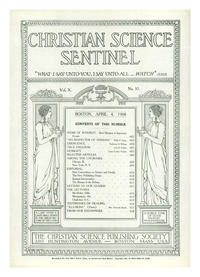