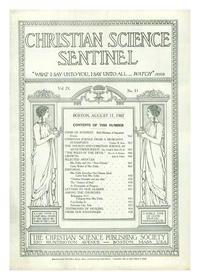 CHRISTIAN SCIENCE FROM A MUSICIAN'S STANDPOINT

The Science which answers, so far as our human apprehension can go, the question of the ages and shows man his relation to God and the universe, is so vast a subject that different standpoints signify no more in the general understanding of it than views of the sun from different parts of the earth's surface to a comprehension of that luminary.
Article

THE CHURCH AND CHRISTIAN SCIENCE AS AN OUTSIDER SEES IT

I have just received a letter from a ministerial friend in our church, of the very highest standing and largest influences.
Article

"THE WILES OF THE DEVIL."

St Paul tells us that "we wrestle not against flesh and blood, but against principalities, against powers, against the rulers of the darkness of this world, against spiritual wickedness in high places;" in other words, against the works of the devil, the evil mind, "mortal mind" in its various phases or segregations, such as hypnotism, animal magnetism, malice, doubt, fear, discouragement, disease, and various other members of evil's brood.
Article

Growth in spirituality is the slow undoing of the wrong that has been slowly done.
Poem

The crest and crowning of all good,Life's final star is brotherhood:For it will bring again to earthHer long-lost poesy and mirth;Will send new light on every face,A kindly power upon the race,And till it come, we men are slaves,And travel downward to the dust of graves.
Article

MRS. EDDY AND HER "NEXT FRIENDS."

In the Chicago Record-Herald of last Thursday appeared an article on Mrs.
Article

At the Red Cross conference recently held in London...

At the Red Cross conference recently held in London the subjects discussed were many, varied, and most interesting.
Article

[We have much pleasure in giving, in part, the following excellent article from Uncle Eli's Magazine, of recent date, by Clarence B.
Article

Christian Science recognizes the possibility of progression from the imperfect to perfect manhood, but sustains the proposition that man is perfect at the outset, and that what we have termed development is simply bringing into activity and manifestation the ideal manhood which is forever intact; attaining a complete and satisfactory state, according to the idea expressed by the psalmist; "I shall be satisfied, when I awake, with thy likeness.
Article

A POCKET EDITION OF THE HYMNAL

In response to many requests for a hymnal suitable for carrying in the pocket, a new edition of the Christian Science Hymnal has been issued.
Article

The author of the Christian Science text-book does not consult nor read letters on disease.
Editorial

In a modest, pleasantly situated home in the city of Concord, N.
Editorial

In an editorial in the Sentinel of July 20 we quoted a newspaper item in which it was alleged that a Christian Scientist in Chicago had been excused from jury duty upon his representation that it would be inconsistent with his religion for him to serve as a juror.
Editorial

THE "SCIENCE OF SOUL."

For what shall it profit a man, if he shall gain the whole world, and lose his own soul?
Editorial

A PREREQUISITE OF PROGRESS

It is an interesting fact that we cannot knowingly entertain contradictory opinions about a given subject at one and the same time.
Article

The handsome new church edifice completed for First Church of Christ, Scientist, of this city, at a cost of five thousand dollars, was dedicated with simple yet impressive ceremony at Carolina Place, Seventeenth and Market Streets, Sunday morning and evening [July 28].
Article

The semi-annual report of the Committee on Publication for the State of New Hampshire, contains some interesting information, and we quote from it as follows:—
Testimony of Healing

In my youth I seldom prayed, except my childhood prayer...

In my youth I seldom prayed, except my childhood prayer at night, because I had heard so many of the best Christians I knew say, "The Lord helps those who help themselves," and I received the fixed opinion that it was never right to pray to God for anything until I had first done everything I could for myself.
Testimony of Healing

That "man's extremity is God's opportunity," was proven...

That "man's extremity is God's opportunity," was proven in my case.
Testimony of Healing

The many positive proofs of the truth of Christian Science...

The many positive proofs of the truth of Christian Science which my husband and I have had during a period of about four and a half years, make me feel it a joyful privilege to bear witness to its healing power.
Testimony of Healing

About eighteen years ago Christian Science was first...

About eighteen years ago Christian Science was first presented to me by a sister, who had been healed by it after the doctors had given her up.
Testimony of Healing

Since taking up the study of Christian Science I have...

Since taking up the study of Christian Science I have been healed of several different ailments, some chronic, and two supposed to be hereditary.
Testimony of Healing

During the past winter I had an experience which...

During the past winter I had an experience which clearly shows the power of Truth as revealed in Christian Science.
Testimony of Healing

I think that I have been interested in Christian Science...

I think that I have been interested in Christian Science long enough to prove the efficacy and permanency of its cures.
Testimony of Healing

Before I give the following testimony I want to express...

Before I give the following testimony I want to express a few words of appreciation and thankfulness to our revered Leader for her wonderful gift to a sin-sick, heart-sick, body-sick world.
Testimony of Healing

Something over two years ago I came to know of the...

Something over two years ago I came to know of the healing power of Christian Science.
Testimony of Healing

Some years ago I was working at my trade as wagon-maker...

Some years ago I was working at my trade as wagon-maker in different carriage shops.
Testimony of Healing

During many years of earnest seeking for spiritual enlightenment...

During many years of earnest seeking for spiritual enlightenment I went to many churches and wandered through the mazes of many beliefs, the last and most disastrous being "mental science," which proved a broken reed in time of trial and left me "without hope and without God in the world.
Testimony of Healing

I have derived a great deal of benefit from the testimonies...

I have derived a great deal of benefit from the testimonies in the Sentinel and Journal.
Article