THE story of Abraham, as given in Genesis, is of profound interest, showing, as it does, what is possible to one of large and noble character in the most trying circumstances and with no guidance save that of the divine Mind. We are told that in the midst of idolatrous surroundings he took his stand for one God; and tradition says that for so doing he was cast into a fiery furnace, as were his three descendants many centuries after his day, and that like them he proved the omnipotence of divine aid in what seemed to be deadly peril.

For the sake of Truth, Abraham left his father's house and his country, presumably giving up all his earthly posessions in order to obey implicitly the divine call. He was a man of princely nature, which was expressed in all he did, and later in what he possessed. His generosity and entire lack of self-seeking were much in evidence in his relations with his nephew Lot, whom he permitted to preempt the rich lands in the plain of Jordan rather than to have any strife as to territory. This trait was also strikingly illustrated in his refusal to take the spoils of war that fell to his share, and in his readiness to give tithes to Melchizedek, "priest of the most high God." That he had sought and found that which alone can give security and plenty, is proved by the divine assurance to him after these experiences,—"Fear not, Abram: I am thy shield, and thy exceeding great reward." Well does our Leader say of this patriarch and others of an early day, that they "caught glorious glimpses of the Messiah, or Christ" (Science and Health, p. 333). 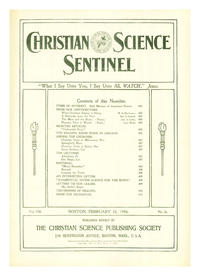