It was about eight years ago that I first heard of Christian Science. I was then unable to do any work. My left arm was lame and the muscles seemed to be shrinking away. My eyesight was very poor and the oculist told me one eye was about gone. At this time a growth appeared on my body which the doctors said would soon have to be removed. A neighbor who had a copy of "Science and Health with Key to the Scriptures" by Mrs. Eddy, loaned me the book. The first time I read it I did not understand it, but by the time I read it through again my thought in regard to the book changed completely, and when I commenced to read it the third time I found I loved it very much. I had never thought that it would heal me, for I was along in years. During this time the abnormal growth gave me much pain, but while reading the book the third time. I found that it did not pain me at all, and I was much surprised when I found that it had disappeared, leaving not a trace of soreness. I knew God had healed me. I began to use my left arm and found that it too was healed.

This happened on Saturday evening, and Sunday I did not say anything about the healing, but kept singing all day. In the afternoon I picked up my book to read, and found that I did not need my glasses, and I have never used them from that day to this. The next morning I surprised my daughter very much by going to the well, drawing a pail of water, and bringing it to the house unaided. I then told her that the truth as taught in Christian Science had healed me.

Send a comment to the editors
NEXT IN THIS ISSUE
Testimony of Healing
Although I am unable to tell of all the benefits I have received... 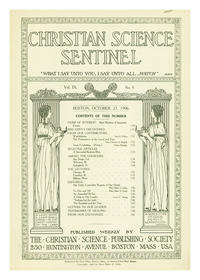