ONE of the principal points of interest to tourists traveling up and down the German Rhine, is the great "Denkmal" monument on the heights above Rudesheim. As one ascends the mountain from the village below, and reaches the grounds surrounding the monument, he cannot help being impressed by the grandeur, the awe-begetting magnificence of the scene which unfolds itself to view. Away below, like a veritable stream of silver, glistening in the early morning sun, flows the Rhine, winding its way around and between the background of high mountains. Impressed by the sight, we turn to the monument, looming up to its vast height before us, and see inscribed upon it the words of the song "Die Wacht am Rhein." This monument is called the "Denkmal," a German word which signifies "The Memorial," or, as Kipling would put it, "Lest we forget."

In thinking of this monument and these words, we are naturally led to consider the significance and purpose of the various monuments erected throughout the world. The one just mentioned is intended to commemorate the victory of the Franco-Prussian war of 1870. Others throughout the world were similarly raised to celebrate great historical events, religious or otherwise, while many have been set up in honor of individuals who have left an imprint on the world's civilization through some great achievement. All these monuments have been erected for the purpose of keeping alive in the memory of man something that had been achieved or accomplished. This is also true of religious ceremonies, fast days, or feast days. These stand largely for memorial or remembrance,—"Lest we forget." 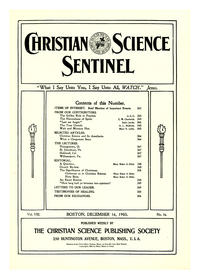