The Value of Unity

From the initial fact of creation, as chronicled in the divinely simple statement, "In the beginning God created the heaven and the earth," to the consummation of all revelation, "I am Alpha and Omega, the first and the last." the Bible is filled with references to the unity of good,—the oneness of Deity and His universe. A careful study of Science and Health, the Christian Science text-book, reveals a kindred emphasis on this scientific proposition. Long before Jesus declared that he and the Father were inseparable, the word that heals had been preached by the prophets; "Hear, oh Israel: the Lord our God is one Lord."

Evidence is not lacking that a recognition of the unity of Principle and idea heals the disordered dream of material living. The very basis of all evil is discovered to be the original lie which translated Mind into minds many, and body into bodies many. Division is the mathematics of mortal mind. Jesus gave us the redeeming truth. "I and my Father are one." When man knows that he is one with Spirit and not one with matter, he is healed of the lie of division. Then he understands that Mind is one, and body is one, for "All is infinite Mind and its infinite manifestation" (Science and Health, p. 468). 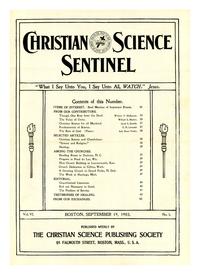