Communion Service of the Mother Church

Two magnificent audiences, numbering upwards of five thousand persons each, participated in the annual communion service of the Mother Church, Sunday, June 15, 1902. As announced in the Sentinel, the services were held in Mechanics Building on Huntington Avenue.

Last year four services were necessary to accommodate all who desired to attend the annual communion, and the attendance would have been much larger if the day on which the service would be held could have been announced earlier. Thus it was readily apparent this year that owing to the rapidly increasing interest in Christian Science throughout the world, and the consequent desire on the part of added thousands to attend the annual communion of the Mother Church, it would be impossible to have a sufficient number of services in the church edifice to accommodate all who would come to Boston for this occasion. Hence the arrangement to hold the services in Mechanics Building. 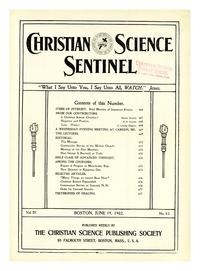