Wonders of the Pan-American Exposition

In the office of Secretary Frank R. Rosseel, who is the executive officer of the Bureau of Publicity for the Pan-American Exposition at Buffalo, one may read this phrase upon a gilded background:

This has become the motto of the city and the citizens of Buffalo. Officially and individually, this terse utterance and splendid maxim has been adopted on every hand. In these swift modern years men seem wonderfully to have increased their capacity for effort, and with all the vim and energy that belong to an enterprising people the citizens of Buffalo are paving royally the way for the glorious Pan-American Exposition to be held in that city next year. The evidences of preparation are to be seen in the general furbishing up in all quarters, the improvement in hotel accommodations, and in the betterment of transportation conveniences within the city. 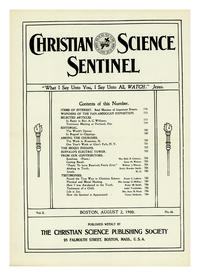