"Blessed are the Pure in Heart"

Some clergymen having published statements peculiarly untrue regarding Christian Science, the following letter appeared in proclamation of the Truth and was published in the Berlin (Ont.) News-Record.

Editor Record:—When the great Teacher of Christianity lived and taught upon earth, his sinless purity did not prevent the hypocritical Pharisee and letter-perfect doctors of the law from saying that he was no better than the publicans and sinners with whom he associated. 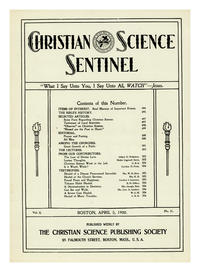