The lecture on "Christian Science, the Religion of Jesus Christ," delivered in Phenix Hall last evening (Thursday, December 14) by ex-Judge William G. Ewing, of Chicago, attracted an audience which completely filled the hall both on the floor and in the balcony, and caused standing room only to be the lot of many who arrived even before the hour set for the lecture to begin. A large delegation of Christian Scientists from other cities was present, a special train being run from Boston early in the evening, returning at the close of the lecture.

Judge Ewing is a member of the Board of Lectureship of the Mother Church of Christian Science in Boston, and he appeared here under the auspices of First Church of Christ, Scientist, in Concord, whose First Reader, Rev. Irving C. Tomlinson, C.S.B., presided. In presenting the speaker Mr. Tomlinson, said:— 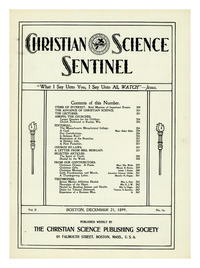