I recently read about an 11-year-old named Victor in a tough city neighborhood who was sentenced by a youth court to 25 hours of community service for shooting a child in the leg with a BB gun. Thanks to a wise judge and a compassionate pastor, part of Victor’s service called for him to clean a hot, dusty room in a nearby church. To everyone’s surprise, he had the place clean in no time, but was then required to sacrifice part of his summer break by helping to run a vacation Bible school at the church. Victor persuaded three incredulous friends to join him, and they had such a good time that when it was over, one of them came to the pastor with a question: “You know these community hours Victor has? How can I get some of those?” (Christian Century, January 11, 2012).

As several of this week’s writers confirm, mistakes often lead to an experience of God’s grace and transforming power. Mark Swinney says in our opening article this week, “When God’s allness and omnipotence are realized, and our true, spiritual, spotless selfhood is clearly discerned, there can’t help but be an overall redeeming effect felt—righting injustices, healing old wounds, wiping clean the past, bringing opportunity for restitution” (p. 6). 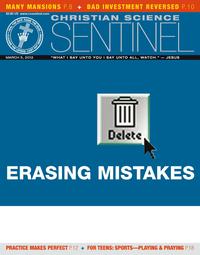