Does God still speak to us?

God's spiritual messages come through loud and clear—when we listen.

Elijah, a prophet whose story is related in the Bible, correctly predicted the coming of drought and famine to the land of Israel. When the famine came, Elijah then heard God tell him to go to a widow woman in a town called Zarephath. God had "commanded" the widow to "sustain" him, came the message (see I Kings, chap. 17). Elijah's visit must have come as quite a surprise to the widow. Far from feeling in a position to feed an extra mouth, the woman was mourning her inability to feed even herself and her child with the little oil and meal she still had. But knowing the infallibility of God's direction, Elijah confidently prophesied, "Thus saith the Lord God of Israel, The barrel of meal shall not waste, neither shall the cruse of oil fail, until the day that the Lord sendeth rain upon the earth."

And that's the way it turned out. The little food the widow had at hand proved entirely sufficient. She and her family were fed, and so was the prophet. As First Kings records it, "And the barrel of meal wasted not, neither did the cruse of oil fail, according to the word of the Lord, which he spake by Elijah." 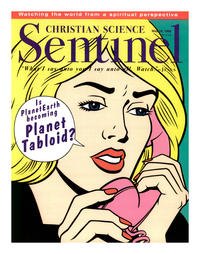