The striking thing about early Christianity was its immediacy. The teachings of Christ Jesus demanded that people go and do like-wise. God's power was at hand to be lived. If we are sometimes tempted to believe that this power is no longer present, the following account may go a long way in renewing our conviction. Dr. Isaac A. O. Ojo is a senior lecturer in chemistry at Obafemi Awolowo University in Ile-Ife, Nigeria. Here he tells of two examples of the practical effects of what he has learned of the Science of Christ.

Two weeks after I'd been introduced to Christian Science by a senior colleague in the university, I was synthesizing a compound to make a new pesticide. These particular chemicals have to be handled very carefully during the process of synthesis. A chemical accidentally poured on my thigh while I was carrying it from one place to another. Its effect on my skin about two hours later was similar to having a hot charcoal put on my thing and bound to it.

I had to turn to God to know that what Jesus said could be proved: "And these signs shall follow them that believe; In my name shall they cast out devils; they shall speak with new tongues; they shall take up serpents; and if they drink any deadly thing, it shall not hurt them." I could see that what I had poured on my thigh could have no effect on my knowing that God is All-in-all. Whatever does not come from God has in itself no reality, no power to harm what God creates. 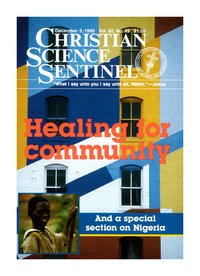