A healing ministry in the military

with contributions from Vic Smith

Cartoons and television sometimes poke gentle fun at military chaplains. Yet the demands they face call for serious spiritual strength. Chaplains are often on the front lines in military conflicts as well as in personal conflicts with such enemies as drug abuse and suicide. Commander Vic Smith has been a Christian Science chaplain in the United States Navy for seventeen years. He has seen duty in Thailand and Japan during the Vietnam War and was stationed on the U.S.S. Missouri in the Persian Gulf during the Iran-Iraq conflict. We asked him to talk with us about his work.

A chaplain doesn't get into pushing his particular denomination, does he? 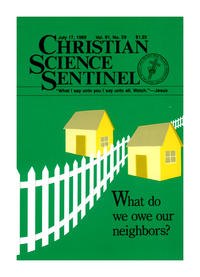