My mother was raised within the teachings of an orthodox Protestant...

My mother was raised within the teachings of an orthodox Protestant church. But she was never satisfied with the conventional concepts of God as the source of both good and evil and of man as a sinner struggling to be better. Early in her marriage she found a Sentinel left by another passenger on a train. She read it from cover to cover and decided that she had at last found a teaching with a truly satisfying concept of God and man, and, to judge by the testimonies of healing, a demonstrable teaching. Her family of three boys, including me, were raised in conformance with the precepts of Christian Science.

Because of our rural location, in connection with my dad's railroad-station assignments, church and Sunday School attendance was spasmodic and often involved driving long distances. The family relied exclusively on Christian Science for healing, with the help at various times of Christian Science practitioners in nearby cities. I was able to attend Sunday School regularly during my engineering college years away from home. The freedom, protection, and healings I have had through the years, including a very happy and harmonious marriage, I attribute to the direction and guidance that resulted from following the teachings of Christian Science. 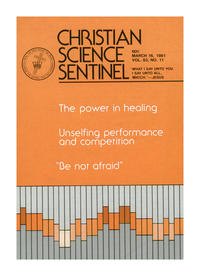