I first relied on Christian Science one time when our little...

I first relied on Christian Science one time when our little daughter was very ill. She had become partially immobile, and I was alone with the decision of what to do. Contemplating the course medicine offered so frightened me that I decided to try Christian Science. I called a Christian Science practitioner for help through prayer, and within the hour the child was healed. It was a point of radical departure for me. The beauty of that hour has provided much inspiration in the twenty-five years since then.

While our children were still young, I began to feel restricted in staying at home—I sensed the need to express my individuality in ways other than constantly caring for small children. One day I read an article in one of the Christian Science periodicals that showed the spiritual value of being well-read in one area of interest, rather than gathering a smattering of information on many topics. Following this recommendation, I read all I could on a subject of concern—the separation of church and state, which is an issue dear to our country's founding principles. In time, I was able to write knowledgeably on this topic, recording thoughts that came to me while I was ironing, cleaning, or traveling. As my knowledge in this particular field expanded, I began to write letters to, and receive answers from, prominent officials who were likewise interested in this subject. Several of my letters to editors were published in widely circulated periodicals, and I also took some leading roles in the community. This activity proved to be satisfying, interesting, and useful without my ever having to leave home for its accomplishment.

Send a comment to the editors
NEXT IN THIS ISSUE
Testimony of Healing
How does one find words to express gratitude for something that... 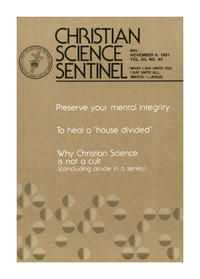