While employed as a ranger in a national park I backpacked out of the wilderness one evening to another ranger's cabin at the end of a long road. Neither the ranger nor his two-way radio was there. Chagrined, I realized I had no way of notifying employees at the entrance station that I needed to be picked up. Already tired from the trek I had just finished, and discouraged by the rapidly descending darkness, I soberly set out on the final five-mile leg of my trip.

It would have been easy to become frustrated and impatient with the slow progress I was making. But I realized that if I were to stop or to give in to the tears that tempted, it would be even more difficult to reach my destination. As long as I continued to put one foot in front of the other, I knew I would inevitably get there. And not only did I get there; I found that replacing my tired thoughts with thoughts of God's goodness lightened my step along the way. 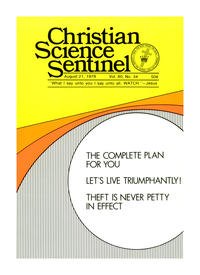