Since the appearance of my last testimony in the January 1972...

Since the appearance of my last testimony in the January 1972 issue of The Christian Science Journal, there have been many more proofs of God's constant care.

Many years ago when a friend introduced me to the study of Christian Science, I knew nothing of its pricelessness. However, it was not long until I began to realize that this Science truly is the "pearl of great price" spoken of in the Bible. Humbly I accepted my friend's encouragement, feeling no prejudice to create doubts as to the validity of Mrs. Eddy's words, no mental reservations, but only open, receptive thought, seeking to understand. From then on, little by little, a transformation began in all that concerned me. First, anemia, which had plagued me all my life, completely disappeared. Chronic constipation was also healed. Now, many years later, with the measure of spiritual understanding I have gained, I know that whatever the need, I have the perfect remedy always at hand—Divine Science. It is the same remedy used by Christ Jesus and, centuries later, revealed by Mrs. Eddy in this wonderful religion, Christian Science, showing us a perfect way of healing all manner of difficulties. 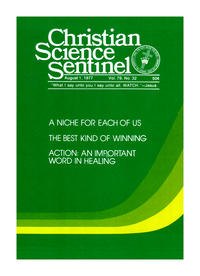