I first heard of Christian Science toward the end of the Second World War. I bought Science and Health with Key to the Scriptures by Mary Baker Eddy and tried to read and understand it. But it made no appeal to me at that time. Twenty years later, however, when we had moved from London to a remote part of Cornwall, some friends of my sons came for a holiday with their grandmother. She was a Christian Scientist. When I remarked, "I've got that book somewhere," she said, "You should find it and read it, shouldn't you?" Which was just what I did. But now it was a very different story. I just couldn't bear to put it down. It was never closed. I read it at every opportunity, day and night, knowing nothing of the multitudes of blessings that were in store for me.

Great was my joy and amazement when, after only three months, I was able to discard glasses I had worn for over thirty years.

Send a comment to the editors
NEXT IN THIS ISSUE
Testimony of Healing
Right from the start, in a visit with a Christian Science practitioner,... 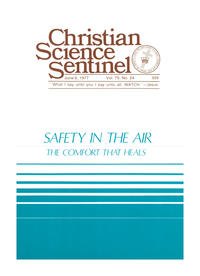