Bill's home in San Francisco was only a few blocks from the zoo. His mother often said laughingly that twelve-year-old Bill was trying to run a zoo at home with all of his pets!

In Bill's room two white mice lived in a big cage. The mice were very comfortable in there, but Bill often took them out of the cage so they could play on his bed while he stretched out to do his homework or read his Sunday School lesson. Bill had attended a Christian Science Sunday School since he was two years old. 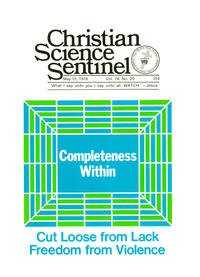