My first published testimony appeared in The Christian Science Journal...

My first published testimony appeared in The Christian Science Journal in 1946. Since that time there have been many more blessings in our family through our growing understanding of this healing Science. When our older son told us he was engaged to marry a young woman who knew nothing about Christian Science, and who had a record of ill health and had been told by her physician that she could not survive childbirth, I was dismayed. Then I realized that since this young man had received the benefits of Christian Science from the age of four, he had what it would take to "meet every adverse circumstance as its master," as Mrs. Eddy says (Science and Health, p. 419).

Shortly after their marriage this young woman began the study of Christian Science. When within a few years their two sons were born, there were no complications. The births were harmonious, and there were no ill aftereffects. These two boys have now grown to manhood and are active students of Science in their branch churches. Their mother, having become a student of Christian Science, is now able to help others. 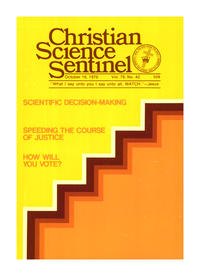