Drug Dependence Can Be Healed Through Prayer

During an Army drug education class a young soldier was loudly and profanely proclaiming his opposition to the military, to his own presence in Vietnam, and to the way the Army treats drug users. The Drug Education Field Team (DEFT) leader, a Protestant Chaplain, who is a Christian Scientist, pointedly stopped the soldier and requested to see him after the class.

Following the class the Chaplain confronted the man's misinformation and attitude. For twenty minutes of heated conversation the man attempted to blame a war environment, the Establishment, or other people for his obvious confusion. The Chaplain both mentally and verbally stopped every attempt made by mortal mind to set up a deceptive smoke screen. 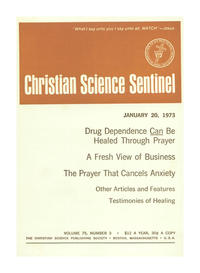