My parents became sincere students of Christian Science when,...

My parents became sincere students of Christian Science when, as an infant, I was healed through the prayers of a practitioner of a severe case of pneumonia. My brother and I had the privilege of attending Christian Science Sunday Schools during our pre-teen and teen years, and any childhood problems during this period were quickly cured through the application of the law of God, supreme harmony, as revealed in Mrs. Eddy's writings.

These proofs of the healing power of the Christ which I witnessed as a girl have been invaluable sources of assurance to me when similar problems have arisen in bringing up our daughter, who is now a freshman in college. My husband, though not a Scientist at the time of our marriage, soon embraced its teaching and learned to place radical reliance on God for every need.

Send a comment to the editors
NEXT IN THIS ISSUE
Testimony of Healing
Mrs. Eddy says in Science and Health (p. 4), "What we most... 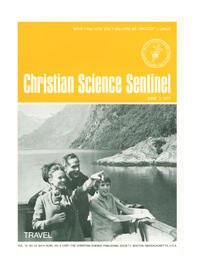