Healing Through the Light of Soul

It was dark. From the window where I sat, I could hardly make out the shape of the mountains in the distance. The trees on the hillside below me were quite indistinguishable. I knew they were there, but they were invisible in the gloom. The other cottages in the village were lost to sight in the valley, as were the two Welsh mountain ponies in the paddock in front of me.

As I sat there watching, a change gradually took place. Hardly noticeable at first, it was getting lighter. The rim of the sun appeared over the horizon, and as it rose, the whole view took on a different character. There was beauty and color everywhere. The purple heather on the hills was clearly visible. I could see the individuality of those delightful cottages, some of them over three hundred years old. The two ponies were there, one black, one brown. The different trees, even the separate leaves, appeared to view.

Send a comment to the editors
NEXT IN THIS ISSUE
Article
Good Is Real: Evil Is Unreal 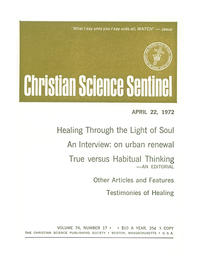