Are we sometimes afraid to give because we think that by so doing our own supply will be depleted? If we give wisely and with love in our heart, it is the law of God that our supply will grow, not diminish. As Mary Baker Eddy, the Discoverer and Founder of Christian Science, writes in Science and Health with Key to the Scriptures, "Giving does not impoverish us in the service of our Maker, neither does withholding enrich us." Science and Health, p. 79;

Giving and using what we have are closely allied. Someone might say, "But I have nothing to give!" There is an illustration of just such a situation in the Bible (see I Kings 17). During a famine in the land, Elijah was instructed by God to go to Zarephath where a widow would sustain him. He found the widow lacking food herself, preparing to use what little meal and oil she had to make a last cake for herself and her son. Elijah told her not to fear but to make him a cake first. He promised that if she would do this the barrel of meal would not waste nor the cruse of oil fail as long as the famine lasted. And so it proved. But first the widow had to be willing to share what little she had.

Send a comment to the editors
NEXT IN THIS ISSUE
Article
What Animates Us? 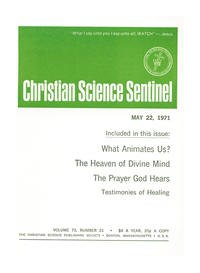