Central High had a winning track team, and Bill wanted to be on it. As soon as track season opened, he began to work out with the team every afternoon after school, although he was a sophomore and could only make the team as a regular in his junior year.

As he trained, Bill progressed as a distance runner. The coach began to notice and encourage him. The newspapers referred to him as a "promising sophomore." The varsity trackmen treated him like a teammate.

Send a comment to the editors
NEXT IN THIS ISSUE
Editorial
What Do We Expect of a Church? 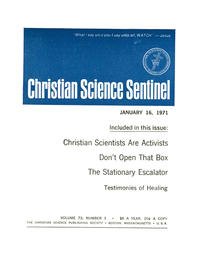