How Near Is God?

I know of a small child who, after attending a Christian Science Sunday School for the first time, was asked by a relative if she had enjoyed it. "Yes," she replied, then thoughtfully added, "I learned about God, and so I shall not be afraid again." "Why not?" she was asked. "Because," she said, "I shall never be alone again."

Mary Baker Eddy, the Discoverer and Founder of Christian Science, writes in Science and Health with Key to the Scriptures, "Spiritual man is the image or idea of God, an idea which cannot be lost nor separated from its divine Principle." Science and Health, p. 303; Upon this scientific fact of the inseparability of God and man, of the creator and that which He creates, are based all the teachings of Christian Science. From this premise are reached all its conclusions. Thus, as Christian Scientists we learn to look outward from the standpoint of perfection, to recognize God as omnipresent Spirit, who includes man and the universe in His allness. The demand made on all of us is to claim this spiritual unity in the face of all arguments to the contrary, to claim the presence of divine Love when hatred and violence seem rampant, to express oneness with Love as its idea, and indeed with all Godlike qualities, in our daily lives.

Send a comment to the editors
NEXT IN THIS ISSUE
Article
Marriage: A Conversation of Love 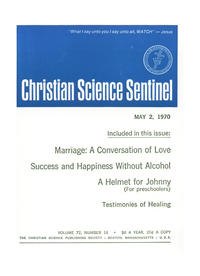