How Obedient Are We?

As one reads the story, he asks himself why they were so blind and stupid. Couldn't they see what happened when they were obedient and then what happened when they were disobedient? Then he begins to examine his own thought and conduct and to detect a similar tendency to be slow in learning the lesson of obedience to God. He is aware of a struggle between the desire to be obedient and an inclination to be disobedient. His experience is similar to that of Paul, who said, "The good that I would I do not: but the evil which I would not, that I do." Rom. 7:19; 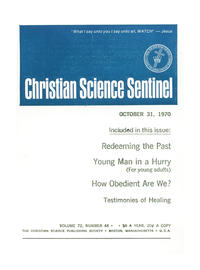