The real universe including man is spiritual. This fundamental teaching of Christian Science often seems hard to grasp. Many individuals looking into this religion accept the premise that there is one intelligent Being, who is the sole creator. Therefore it is clear and logically acceptable to them that nothing can exist which is not the outcome of this one infinite Being. But when it is stated that God, the sole creator, is Spirit and good and that therefore His universe is not just partially but must be totally spiritual and good, never material or evil, the newcomer sees that the immediate evidence of the physical senses is being wholly contradicted.

Are the physical senses reliable? During the Second World War the writer was on a North African desert with a regiment of tanks. Under certain conditions vision could be so distorted by the haze and perhaps by the tension of war that a bush could be mistaken for an enemy tank and distant camels could appear to be moving transport. Sometimes we would even take steps to deal with an enemy tank, only to find that it was a bush. No material pictures or human terms are adequate fully to illustrate spiritual facts. But sometimes they can illustrate the illusive nature of sense testimony and lead to spiritual truths. In this instance what appeared to be a tank was actually a bush. It is obvious also that there never was both a tank and a bush—always only a bush. 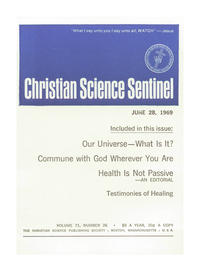