Anyone who has at times failed to live up to his highest sense of good and yet in his repentance has felt the mercy of God in the forgiveness of sin has gained some glimpse of the unfailing love of God. In the Old Testament the Psalmist describes the divine mercy in picturesque terms. "As the heaven is high above the earth, so great is his mercy toward them that fear him. As far as the cast is from the west, so far hath he removed our transgressions from us." Ps. 103:11, 12;

This unlimited mercy rests on the truth that evil is unreal and that good is the only fact of existence. Sometime, and in some way, each of us will come to understand this and know the presence of God as the All-in-all. Divine Principle never forgives evil itself, but the Father always beholds the son in the light of divine Love, and this constancy shows itself in infinite mercy. Christ Jesus came to express the nature of God, and he told his followers to be merciful to their fellowmen—to forgive them "until seventy times seven." Matt. 18:22; In the light of this mercy, is there any such thing as an unsolvable problem? 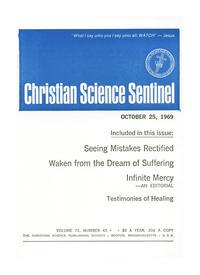