The testimonies in the periodicals have been an inspiration to me...

The testimonies in the periodicals have been an inspiration to me for many years. I am so grateful for them that I would like to add my word of praise for the truth that heals.

Many years ago when I was in boarding school preparing for college, my father passed on. At that time, during the depression of the thirties, my mother took up the study of Christian Science, and through her I too became interested. We did not have much money, but my mother, through the help of Science, got a job and I continued in school. The following year I entered the college I had planned to attend. After that year it seemed I could not afford to go on there, so I stayed at home the next year and with the aid of a scholarship went to a college in the city where I was living.

Send a comment to the editors
NEXT IN THIS ISSUE
Testimony of Healing
Words truly are inadequate to express my gratitude to God for all... 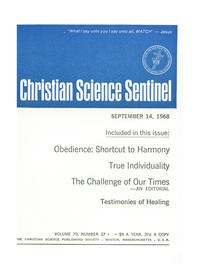