Do you know that God once spoke to a boy named Samuel? The Bible tells us that God called to Samuel four times. The first three times Samuel thought that Eli, with whom he lived, had called him, but Eli said he had not.

Eli told Samuel that if he heard the voice again he should say, "Speak, Lord; for thy servant heareth." I Sam. 3:9; After that, Samuel knew that God was always so near him that they could speak to each other. He listened for God to guide him, and so Samuel grew up to be a wise prophet and good judge of his people. 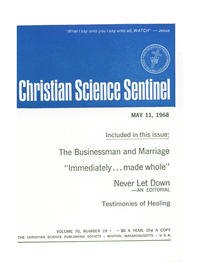