Military service can be a stiff test for the mental and physical capacities of an individual. And a tough test for his moral capacities is how well he stands up to the worldly temptations often associated with military life. Military service can be looked upon as a crucible for the molding of character. It frequently brings out true manliness in men.

A student of Christian Science who was serving in his country's Navy proved how daily prayer can protect one from temptation. His ship was ordered to an Asian port for a special assignment. At this port a four-hour liberty was granted to most of the crew. Because of the civil strife that was going on those going ashore were sent in groups. The group to which the Christian Scientist was assigned included some of the most materially-minded men on the ship, and they were planning to have a wild time ashore. 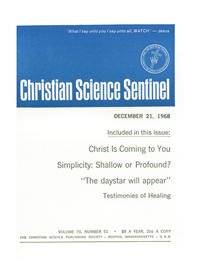