Lesson of the Five Geese

In his book Ring of Bright Water Gavin Maxwell has a delightful tale to tell about five wild geese he reared from goslings. To protect them at night from their enemies of the Scottish hillsides, he built a wire compound. Each morning he opened the gate and let them out to the banks of the loch and to the sea. One morning he arose earlier than usual, before the sun was up, and opened the gate. The geese did not come out at once, and he left them. Hours later he was astonished to see every one of the geese still inside the compound pacing impatiently up and down before the open door. It was some time before he realized what was the matter; then he walked up to the wire gate, carefully shut it, and immediately opened it again. At once all the geese rushed excitedly through, hurrying to get down to the water, glad to be given their freedom. Not one stayed back.

How like mankind this story is! Mortal man has never been able to free himself from self-imposed bondage. The human mind has proved to be quite inadequate to the task of achieving its own salvation. In spite of its many inventions, it still believes it awaits a Saviour. Mary Baker Eddy, the Discoverer and Founder of Christian Science, says in Science and Health with Key to the Scriptures: "When will man pass through the open gate of Christian Science into the heaven of Soul, into the heritage of the first born among men? Truth is indeed 'the way.'"Science and Health, p. 535; 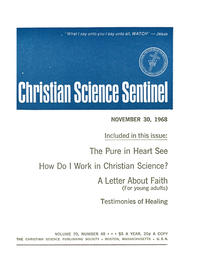