Christian Science was presented to my mother before I was...

Christian Science was presented to my mother before I was born. She had been in poor health, had lost one child, and had been told by the family physician that having another child might prove fatal. As she began to read the textbook, Science and Health by Mrs. Eddy, she became so interested and uplifted that her whole life became transformed. Through reading and studying this textbook she was healed. She experienced painless childbirth the next two times, much to the amazement of the physician.

Christian Science continued to be the greatest blessing in her life and in the life of the family. A healing which I experienced when I was in my later teens stands out as a beacon for me. The difficulty was a nervous condition. Prayerful help was given me by a practitioner, and I studied earnestly as I had been taught in the Christian Science Sunday School. There was much wrong thinking and even hate to be uncovered and overcome. This was certainly a period of spiritual growth for me in striving to discern my true selfhood as the image and likeness of God and, most important, to see everyone else's selfhood as this true likeness of God.

Send a comment to the editors
NEXT IN THIS ISSUE
Testimony of Healing
The blessings of Christian Science have been bountiful in my... 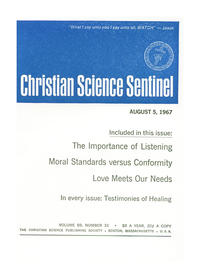