The Preventive Art of Christian Science

Mrs. Eddy states, "The prophylactic and therapeutic (that is, the preventive and curative) arts belong emphatically to Christian Science, as would be readily seen, if psychology, or the Science of Spirit, God, was understood." Science and Health, p. 369;

A clear instance of the power of Truth to prevent disease was experienced by a student of Christian Science while he was living on a yacht in a southern port. The Bible Lesson in the Christian Science Quarterly for that week included several selections which dealt with the powerlessness of food to harm man. One selection from the Bible told how Elisha changed the belief about a pot of poisoned gourds and rendered it harmless. And another selection was this command: "Whatsoever is sold in the shambles, that eat, asking no question for conscience sake." I Cor. 10:25; The lesson also included these words by Mrs. Eddy: "If mortals think that food disturbs the harmonious functions of mind and body, either the food or this thought must be dispensed with, for the penalty is coupled with the belief."Science and Health, pp. 388, 389;

Send a comment to the editors
NEXT IN THIS ISSUE
Article
"Listen, Judy" 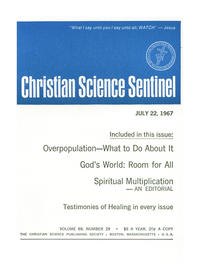