Christ Jesus taught and lived pure Christianity. Humanity has bungled in its efforts to follow him, but he remains the example of the ideal Christian. Christian Science accepts his example fully and declares that the Christ, the divine nature he expressed so patiently, is the true nature of everyone, for God's man is made in the Father's image. We learn what Christliness is from the Scriptures, from studying the life and character of the Founder of Christianity. And when we embody the same ideals of love and truthfulness that he did, we can prove the power of good over evil and matter, even as he proved it.

Jesus' objective in the worship of God was spiritual. It was not to soothe or to increase matter but to prove its falsity and thus to develop in men the spirituality that belongs to God's sons. When the people were blind to his purpose, they followed him for the material benefits they received. Then Jesus rebuked them, saying, "Ye seek me, not because ye saw the miracles, but because ye did eat of the loaves, and were filled." John 6:26; 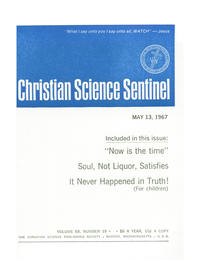