"He found him in a desert land, and in the waste howling wilderness;...

"He found him in a desert land, and in the waste howling wilderness; he led him about, he instructed him, he kept him as the apple of his eye" (Deut. 32:10). My own religion gave me no solace; so in my loneliness, doubt, and fear, I turned to a Christian Science practitioner for help. We had many long talks that were inspiring and gave me the courage to go on.

At Christmastime that year I accepted an invitation to spend Christmas in Los Angeles with an aunt and a cousin. While I was with them, something snapped in my back, and I could not straighten up. The pain was severe. I was taken to the hospital and kept under sedation and in traction until the doctors could X-ray my back and find out what was wrong.

Send a comment to the editors
NEXT IN THIS ISSUE
The Bible Speaks to You
RADIO PROGRAM NO. 250 — What Is the Basis of Progress? 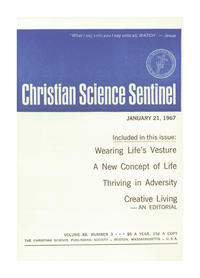