"You have the swing"

One summer day the writer's car was stopped at a red traffic signals in front of a children's nursery playground. A small girl, very much distressed, was in one corner of the grounds crying loudly. Her eyes were closed, and both her hands tightly held the ropes of a swing. Above the child's shrill cries could be heard the calm, clear voice of the woman attendant who was standing near her: "Nancy dear, you have the swing. Open your eyes and look. There is no one else there. You have the swing."

However, it was not until the attendant walked over, gently turned the girl around, and proved there was no one trying to take the swing away from her that the cries ceased and the little one began enjoying the use of the swing. 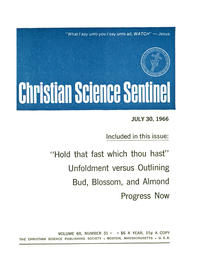