I should like to relate an experience which stands out to me and...

I should like to relate an experience which stands out to me and which proves that Christian Science heals quickly and effectively.

Some years ago when my daughter attended high school, she awakened in the night in great suffering, the nature of which brought the suggestion of poliomyelitis to my thought. Without turning on lights in the room, I declared the truth audibly to her. After praying for some time, we came to that time of day which is known as "the darkest hour before the dawn." Outside it was as black as I have ever known it to be. Just then, as though obeying someone who had lifted a baton, birds in the neighborhood began to sing lustily.

Send a comment to the editors
NEXT IN THIS ISSUE
Testimony of Healing
Let the words of my mouth, and the meditation of my heart, be... 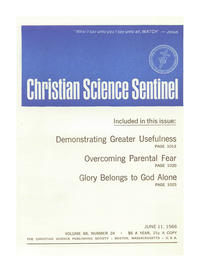