There Is No Disease

To many individuals it may seem that the Christian Scientist takes an extreme position when he states, "there is no disease," right in the face of the material evidence of disease. But there is a good foundation for such a statement. In like manner it may seem extreme for one to state that there is no accident right in the face of evidence to the contrary. One who will study the Christian Science textbook, Science and Health by Mrs. Eddy, will find the explanation for these statements. 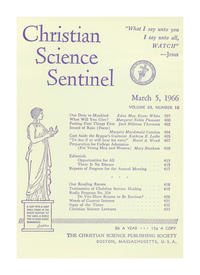