The Ever-availability of Divine Law

What was it that enabled Christ Jesus to make this startling prediction: "He that believeth on me, the works that I do shall he do also; and greater works than these shall he do; because I go unto my Father"? John 14:12; For centuries the Christian churches, to the extent that they have put credence in this remarkable statement, have held that its fulfillment depended wholly upon believing strongly and fervently enough in Jesus' role as the Messiah.

Yet, despite the intensity of such belief by millions of devout and earnest Christians, how often have they been able to prove the truth of Jesus' words? Except in the case of the Master's own disciples, of the apostles, and of other Christians for a brief period during the earliest days of Christianity, and a few other widely scattered instances, the works which the Master did were not repeated until the second half of the nineteenth century, when the discovery and founding of Christian Science by Mary Baker Eddy resulted in the restoration of primitive Christianity and its element of healing through spiritual means. 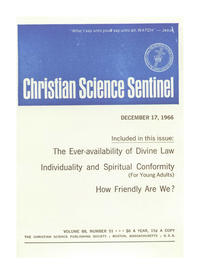