[The above is an abbreviated, post production text of the program released for broadcast the week of August 13-19 in the radio series, " The Bible Speaks to You. Heard internationally over more than 950 stations, the weekly programs are prepared and produced by the Christian Science Committee on Publication, 107 Falmouth Street, Boston, Massachusetts 02115.]

RADIO PROGRAM No. 176-Watch What You Think!

QUESTIONER: Many people talk quite a bit about their aches and pains. They almost make a pastime of it. I'd like to know why the Christian Scientist feels it's important not to do that.

SPEAKER: Well, primarily because we've found that fear is one of the basic causes of disease. And a great deal of talk about disease often increases the fear of it. 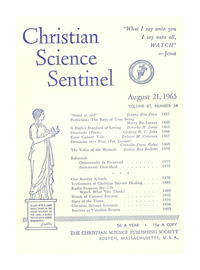