The True Sense of Freedom

Christian Science makes a substantial contribution to the cause of human freedom by adhering to the fact that freedom is a divine quality impartially bestowed upon the sons and daughters of God.

Human bondage of every kind derives from assuming that man is mortal, separated from God through sin. Those who subscribe to this belief interpret the second account of creation in Genesis literally, thus mistaking it. In doing so, they deprive themselves of an appreciation of the first account of creation—the account which underlies the theory and practice not only of Christian Science but of primitive Christianity. The inspired account of creation with which the Bible begins includes this positive declaration (Gen. 1:31): "And God saw every thing that he had made, and, behold, it was very good." Christian Scientists do not interpret the second account of creation literally. Mrs. Eddy writes in Science and Health (p. 214), "Adam, represented in the Scriptures as formed from dust, is an object-lesson for the human mind." Here is represented the type of thought that has been seduced by the mesmeric suggestion of evil, so that it entertains a false sense of freedom which ends in bondage. 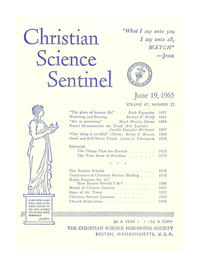