[The above is substantially the text of the program released for broadcast the week of April 9-15 in the radio series, "The Bible Speaks to You," heard internationally over more than 900 stations. This is one of the weekly programs prepared and produced by the Christian Science Committee on Publication, 107 Falmouth Street. Boston, Massachusetts 02115.]

QUESTIONER: I was impressed by a statement by Brian billow in his hook "Hurdles lo Heaven. (© 1963, by Brian Whitlow. Harper & Row. Publishers, Incorporated, New York, N. Y.) He says, "The great difference between a man and an animal or a vegetable is that a man doesn't have to stay the way he is. He can take a look at himself and change himself. This is a unique ability. A horse cannot do it nor can a cabbage. But a man can. A man can deliberately take steps to alter things about himself."

Now, many people ask: Is it really possible to reform—I mean, for people who have led the kind of life they're not particularly proud of? 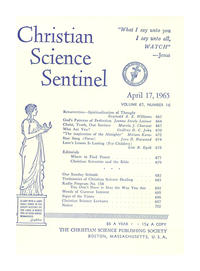