In the Bible evil is called by many names—serpent, Satan, tempter, Beelzebub, devil, great red dragon. In Christian Science all these names are summed up in the generic term "animal magnetism."

Before Mary Baker Eddy, the Discoverer and Founder of Christian Science, used this term, animal magnetism had been the subject of a number of investigations and of a number of books. In "Science and Health with Key to the Scriptures," in a chapter entitled "Animal Magnetism Unmasked," Mrs. Eddy writes (p. 100): "Mesmerism or animal magnetism was first brought into notice by Mesmer in Germany in 1775. According to the American Cyclopedia, he regarded this so-called force, which he said could be exerted by one living organism over another, as a means of alleviating disease."

Send a comment to the editors
NEXT IN THIS ISSUE
Article
Coexistence, Not Compromise 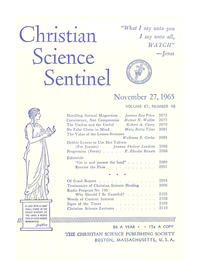